Helene Anja Kraft, PhD student in the Geophysics research group at the Department of Geosciences and Nature Resource Management (IGN) has in June received the prestigious 'Outstanding Student Poster Award' for the poster that she presented at the General Assembly of the European Geosciences Union (EGU), the biggest geoscience meeting in Europe in 2014. 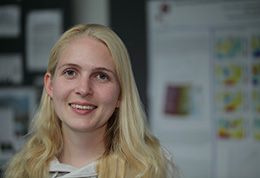 12,500 participants from 106 countries participated in this year’s General Assembly, which was held in Vienna in early May and was EGU’s largest so far. More than half of the participants were students and postdocs. Every year, student poster presentations are judged by three senior participants who assess the scientific quality and the results of the studies, as well the students' overall knowledge in the field of study and their ability to present the results and to answer questions. They also assess the presentation style, clarity, and logics of the posters.

Helene Anja Kraft presented the poster "Central-eastern Greenland's lithospheric structure from surface wave tomography and receiver functions", which is based on analysis of seismic data acquired during 2009-2012 in Easter and Central Greenland. The poster is now exhibited at IGN in the Rotunda of the Geocenter at Øster Voldgade 10.