New knowledge gained on Egtved Girl was recently chosen by Ingeniøren as best research of the year 2015 in Denmark. The Department of Geosciences and Natural Resource Management has contributed to the research on the blond girl from the Bronze Age that also came on the top 10 list of last years’ archaeological discoveries worldwide. 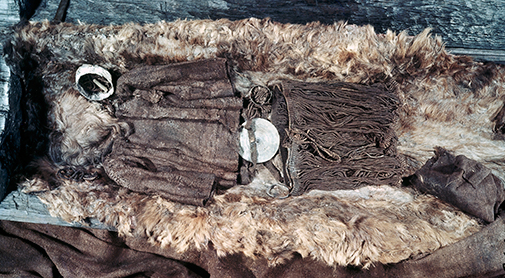 In May 2015 it was revealed that ‘our’ Egtved Girl was not born nor did grow up in Southern Jutland, as previously supposed. The blond girl from the Bronze Age was discovered in Egtved in 1921, and new analyses of her clothes, hair, teeth, and nails indicate that she actually came from Southern Germany. She did first come to Egtved shortly before she died. This is the first time ever that researchers were able to provide such detailed mapping of a prehistoric person’s journeys, raising great interest in Denmark as well as worldwide.

Senior researcher Karin Margarita Frei from the National Museum of Denmark and the Danish National Research Foundation's Centre for Textile Research at the University of Copenhagen came to the surprising conclusions by leading groundbreaking analyses of strontium isotopes, i.e. variations of the element strontium based on different atomic weights. Researchers compared strontium isotope compositions from the Egtved Girl with bioavailable signatures characteristic of Denmark and Northern Europe. This method allowed them to locate her area of origin as well as to reconstruct the travels of the last two years of the girl’s life.

Among the researchers involved is Professor Robert Frei from the Department of Geosciences and Natural Resources, where all the analyses of strontium isotopes were carried out. He comments: “The collaboration we have with the National Museum of Denmark is not only interesting and fruitful, but as exemplified by the Egtved Girl study also proved to be of great importance for many different scientific research fields, besides attracting the interest of the general public. This demonstrates that there is a great potential in collaborating cross-disciplinarily also with institutions outside the University of Copenhagen.”

The research results raised great interest and won recognition in Denmark and abroad. In the beginning of December 2015 the Egtved Girl was announced to be one of the ten most important archeological discoveries of the year by the acknowledged Archaeology Magazine of the Archaeological Institute of America – see the article Top 10 Discoveries of 2015. The Danish daily newspaper Politiken writes about the news on 15 December in the article Egtvedpigen hitter på top 10. This was followed by the acknowledgment in Denmark, as the media Ingeniøren announced it to be the best research in Denmark in 2015 in the article Videnskabens top-5: Guldet går til Egtvedpigen.

Read more
You can read more in the original news from May 2015 The Bronze Age Egtved Girl was not from Denmark and in the scientific article on Scientific Reports, that is part of Nature, where the interesting results were published Tracing the dynamic life story of a Bronze Age Female by Karin Margarita Frei, Ulla Mannering, Kristian Kristiansen, Morten E. Allentoft, Andrew S. Wilson, Irene Skals, Silvana Tridico, Marie Louise Nosch, Eske Willerslev, Leon Clarke, and Robert Frei.