The Earth releases more CO2 to the atmosphere when temperatures rise

More CO2 is being released from the Earth system as a result of rising temperatures than previously thought. This is the conclusion of an interdisciplinary analysis based on a study involving the controlled warming of 49 sites all over the world, the scientific journal Nature reports. Department of Geosciences and Natural Resource Management at The University of Copenhagen participated in the study, with measurements from Denmark, Northern Sweden and Svalbard, among other places. 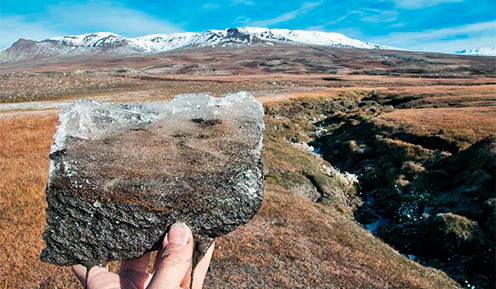 Understanding the Earth’s release of greenhouse gases is crucial to predicting how the atmosphere’s greenhouse gas content will change in line with changes in the Earth’s climate. One important question is whether the carbon in the Earth’s top pool/layer of easily converted organic matter will be released even more quickly if air temperatures rise. In the latest issue of the journal Nature, researchers from a number of institutions - including the University of Copenhagen - have gathered and analysed data from 49 sites around the world where the air temperature has been artificially increased by a few degrees for a number of years.

The method involved comparing the content of the organic matter in the soil before and after this “controlled warming”. This enabled researchers to calculate the changes to the carbon pool in the soil after warming. A statistical analysis showed that the soil’s carbon content had decreased overall, and that the loss of carbon was greatest in areas that already contain a lot of carbon. At a global level, the data also shows that there are big differences between locations. The Arctic is an area with large carbon stocks in the ground, as well as a region where future temperature rises may have particularly pronounced effects.

To put the study’s main conclusion in a global context, the investigation indicates that the loss of carbon from the Earth’s top layer of soil may contribute up to 17 per cent of human-related emissions of CO2 into the atmosphere in the period leading up to 2050. There are many uncertainties and assumptions behind the calculations, but overall the study suggests that a warmer climate will contribute to increasing the amount of CO2 released from the Earth’s soil and therefore accelerate global climate change.

The contributors from the Department of Geosciences and Natural Resource Management at The University of Copenhagen have the following comments on the study:

Professor Bo Elberling, Director of the
Centre for Permafrost:

“The investigations in the arctic locations confirm the large carbon pools, but also show that the changes in carbon content resulting from the warming vary significantly from location to location. We do not yet have any full understanding of the reasons behind these variations, but the ongoing investigations are beginning to shed light on them. In the Arctic we are also seeing increased carbon sequestration in plants - not least in the roots, which are not included in the analysis. It is important to bear in mind that the balance between greater soil carbon losses and greater uptake in plants as a consequence of climate change is essential to the ‘balance sheet’ of greenhouse gases in the atmosphere. And this balance sheet has not been tallied yet”.

“On a global level, the study shows a clear correlation between the current levels of carbon stocks in the soil and the loss of carbon that the warming process entails. In the two locations in Denmark specifically, the study has demonstrated a soil carbon loss due to warming, which can partly be explained by the drying out of the soil. Less water in the soil may result in less plant growth and thus a reduced input of carbon to the soil. And in future, this interaction between warming, precipitation and drought will be a decisive factor in the overall balance of greenhouse gases in our ecosystems as the climate heats up”.