Deltas are important ecosystems, where freshwater meets the sea, and where people for centuries have been engaged in agriculture and fishing. Today, most of the deltas in the world are drowning because of increased human exploitation and a rise in the global sea level. In an article just published in Nature, a research team led by the Centre for Permafrost at the Department of Geosciences and Natural Resource Management at the University of Copenhagen has shown that deltas in Greenland, unlike most other deltas, are growing. 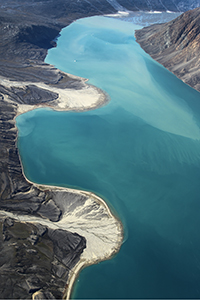 Figure caption: According to a new study from the University of Copenhagen, the Greenlandic deltas have been expanding as a result of the warmer climate Photo credit: Anders Anker Bjørk.

The study has been carried out by Mette Bendixen from the Centre for Permafrost and Lars L. Iversen from the Freshwater Biological Laboratory at the University of Copenhagen in collaboration with a team of Danish, American and Greenlandic researchers.

"We examined 121 deltas by looking at historical aerial photos taken by the American army during the Second World War. We compared these with modern satellite photos. In this way, we have been able to track changes in the Greenland deltas and see what has happened over the last 75 years," explains Postdoc Mette Bendixen.

The growing deltas are affecting the infrastructure in Greenland with major consequences for both fishing and tourism. The results from the study have altered our previous understanding of how the Arctic coast reacts to climate change. 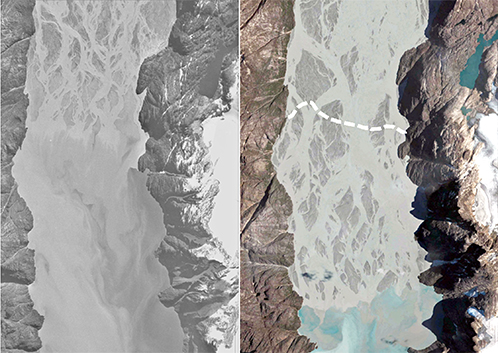 The study investigates changes to the deltas since the 1940s and up until today. In the period between 1940 and 1980, the deltas did not change much, but as the climate became warmer, the deltas started to grow. The photo on the left shows a delta in West Greenland photographed in 1985 and on the right the same delta in 2010. It clearly shows how the delta has been extended by several kilometres over this 25-year period. Photo Credit: Left, Danish Energy Agency. Right: Google Earth.

"Our study shows how climate change affects environmental processes in the Arctic landscape. As a consequence of the warmer temperatures, more sediment is transported out to the coast. At the same time, the open-water period has been extended, and the material is therefore deposited in the deltas. And in this way, the deltas are growing," says Associate Professor Aart Kroon.

"Large parts of the Arctic coasts are being eroded, but in Greenland, we see the opposite happening. The study shows that climate change in the Arctic affects the coasts in a different way to what we have seen so far," says Mette Bendixen.

Link to the article