Center for Permafrost continues its research for another four years

The University of Copenhagen and the Danish National Research Foundation (DNRF) has signed an agreement for continuation of the Center for Permafrost (CENPERM) for the next four years. CENPERM is a Center of Excellence running for the period 2012 – 2022. The total funding received from DNRF is now close to 100 million DKK. 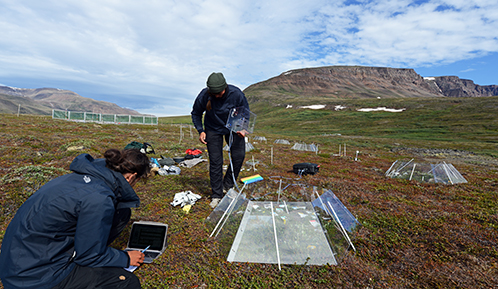 CENPERM performs research on the physical, biological and biogeochemical processes in ecosystems that are affected by permafrost: soils that are continuously frozen.

These ecosystems, which survive in cold and often harsh environments, are anticipated to change because of climate and environmental changes in high latitudes. A substantial part of CENPERM’s field research is performed at different places in Greenland and Sweden.

CENPERM is led by Professor Bo Elberling and is collaboration between the Department of Geosciences and Natural Resource Management and the Department of Biology at the University of Copenhagen and the Geological Survey of Denmark and Greenland (GEUS).

For the second phase of the Center for Permafrost, which has been granted now, there will be a special emphasis on the use of the collected data for upscaling.

“We have now done the basic studies and will start with phase two, in which CENPERM will get a new twist. Now, we will find out whether our results are valid on larger scale”, says Bo Elberling.

He explains that many different tools will be applied in this phase, such as drones, satellite images, statistics and computer models.

As awareness and concern of recent rapid climatic changes in the Arctic grows, so does the need for a long-term perspective on these changes. Improved knowledge on the nature of the coupled biological and climatic feedback mechanisms following accelerated permafrost thawing will be essential.

Soil ecosystems with underlying permafrost cover nearly 25% of the ice-free land area in the northern hemisphere and store almost half of the global soil carbon. Future climate changes are predicted to have the most pronounced effect in northern latitudes. These Arctic ecosystems are therefore subject to dramatic changes following thawing of permafrost, glacial retreat, and coastal erosion.

The most dramatic effect of permafrost thawing is the accelerated decomposition and potential mobilization of organic matter stored in the permafrost. This will impact global climate through the mobilization of carbon and nitrogen accompanied by release of greenhouses gases as carbon dioxide (CO2), methane (CH4) and nitrous oxide (N2O).