A 208-million-year-old giant salamander-like amphibian found in Greenland, has now been described from the Late Triassic rocks of East Greenland. This new species represents the most north-westerly-ever found and adds to our understanding of life in Greenland during the Late Triassic. But it also raises fundamental questions as to the geographic distribution of species across the continents at this time. 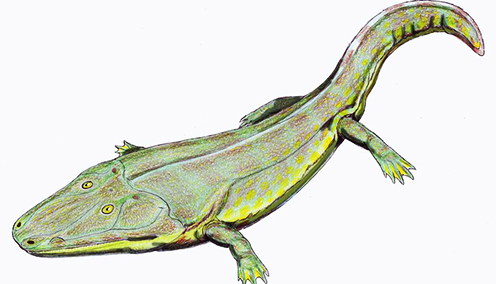 Drawing by Ana Luz, collaborator of the Museu da Lourinhã.

Cyclotosaurus naraserluki, a new species of gigantic amphibian from Greenland, was described in the Journal of Vertebrate Paleontology and led by Marco Marzola, who is a double degree PhD candidate in vertebrate paleontology from the Department of Geosciences and Natural Resource Management at the University of Copenhagen and NOVA University of Lisbon (FCT-UNL) and collaborator of the GeoCenter Møns Klint and the Museum of Lourinhã (Portugal).

“We know amphibian fossils in Greenland, Europe and the Southern USA, but until now, Cyclotosaurs has only been found in Europe. From this new discovery, we can now say that during the Late Triassic, the amphibians in Greenland were closer-related to those in Europe than they were with North America. This is particularly interesting because during that time, Greenland was geographically closer to North America, as today. We also notice a similar pattern among other animal groups, such as the crocodile-like phytosaurs, pterosaurs, and dinosaurs.” explains Marco Marzola.

The new species was discovered in the 208 million year old Fleming Fjord Formation, Jameson Land Basin, East Greenland. During the Late Triassic period, this area was a vast lake system and Greenland was sandwiched between the North American and European continents. Greenland laid much further to the South, and the Jameson Land Basin lay at about the same latitude as Northern Portugal today. This gave Greenland a temperate climate, ideal for these gigantic aquatic predators.

“The Greenlandic and European fossils are similar and both found north of a wide and arid climate belt, whilst the Southern USA were located more to the South. We believe this demonstrates that during this time, it was climate, rather than geographic distance, that played a key role in the distribution of life on Earth”, explains Marco Marzola.

The new species, described in the Journal of Vertebrate Paleontology, is named Cyclotosaurus naraserluki, after the Greenlandic word for amphibian/salamander, ‘naraserluk’, and is represented by a complete skull and three vertebrae. Its flat, triangular skull measures 57 cm long and 42 cm wide, allowing for estimates of a total body length of around 2.5 meters.

“C. naraserluki presents some unique characters in the anatomy of its skull that allows us to name it as a new species. It also presents a distinctive combination of characters shared with other cyclotosaurs, including holes in the front of the snout that would have housed long tusks, probably for preying on fish and other aquatic animals”, explains Marco Marzola.

The study was made in collaboration with Prof. Octávio Mateus (FCT-UNL/Museum of Lourinhã), Prof. Niel Shubin (University of Chicago), and Prof. Lars B. Clemmensen (IGN-KU).

About the Research Group Basin Studies