A study by researchers at IGN in collaboration with French researchers uses unprecedented data sources to measure vegetation carbon stock dynamics at continental scale. The study demonstrates that the net carbon balance is negative for 2010-2016 over the African continent, and that most of the carbon losses occurred in dryland savannahs. The results were recently published in the journal Nature Ecology and Evolution. 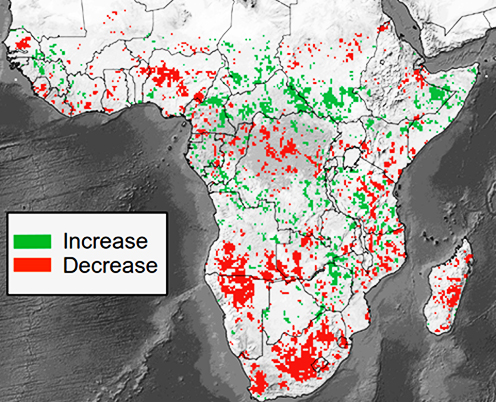 French scientists (CEA, CNES, CNRS, INRA) have produced a new data set retrieved from space-borne observations of the SMOS satellite operating since 2010. The data set is based on low frequency passive microwave emissions, which are insensitive to cloud cover and green vegetation and thus able to quantify aboveground biomass carbon of the entire vegetation layer, including stems and branches, even when the vegetation is dense.

The research group around Rasmus Fensholt and Martin Brandt had the chance to be the first group testing these new data, with groundbreaking results. For the first time, scientists were able to monitor large scale carbon stock dynamics at annual scale. The groups expect this tool to be key in future monitoring of carbon losses and gains for national reports and large-scale efforts, such as the United Nations Framework Convention on Climate Change (UNFCCC) and the Intergovernmental Panel on Climate Change (IPCC).

A first application to the African continent showed highly dynamic carbon stocks, and especially dryland savannahs showed surprisingly high gross losses which were caused by recent drought years. The study concludes that the new tool is close to be operational and highlights the importance of drylands in the global carbon balance.

Read the Article in Nature Ecology and Evolution