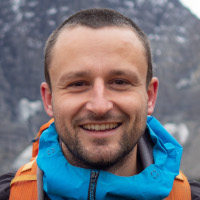 My research interests focus on ancient ultramafic mantle melts and the products of their formation – both residues left behind in their mantle source regions and differentiation products such as ultramafic cumulates and basalts in the Earth’s crust. My PhD centred on the ca. 1.9 Ga Winnipegosis Komatiites from Manitoba, Canada, some of the best preserved komatiites in the world and a rare example of Proterozoic komatiite magmatism. Following this, I completed a short post-doc studying mantle xenoliths from beneath the Kirkland Lake gold mine, Canada, in an attempt to understand the genesis of precious metal deposits. Since 2019, I have been working as post-doc and assistant professor at the University of Copenhagen, studying Archaean ultramafic rocks from West Greenland. The include Meso- to Neoarchaean noritic dykes and enclaves of the Maniitsoq region, and some of the oldest peridotites and chromitites on Earth, from the Eoarchaean Itsaq Gneiss Complex.

Alongside these major research works, I have participated in a variety of projects, including remote fieldwork in Northern Canada and Greenland, research on the metamorphism of Archaean komatiites, precious metal mobility in Phanerozoic ophiolites, chromite provenance in Archaean sedimentary rocks, and even the origins of S-type granites. I use a variety of petrological and geochemical techniques, with a focus on platinum group element (PGE) geochemistry and Re-Pt-Os isotopes, supported by in-depth geochemical modelling.

My research interests focus on the Earth’s mantle and the magmas that form when it melts. The mantle is the solid rocky portion of the Earth that extends from just below the crust (from a few kilometers to 90 km deep), to the Earth’s core roughly 2900 km below the surface. Under certain conditions this mantle rock can melt to form magma. These magmas move upwards into the crust where they can either erupt as a lava, or slowly freeze in a magma chamber to form a ‘cumulate’ rock. By studying ancient lavas and cumulate rocks that formed at different times in Earth history, my research aims to capture ‘snapshots’ of the temperature and composition of the Earth’s mantle, and to understand how magmatic styles have changed throughout geological time. As a geochemist, I mainly study rocks by grinding them into a powder, dissolving them, and analysing their chemical composition with mass spectrometers. I particularly specialise in analysing precious metals related to platinum. These elements are very rare near the Earth’s surface but common in the Earth’s core and in meteorites, so they can tell us about the processes that formed the Earth’s core, or the last stages of Earth formation when the Earth and Moon were being bombarded by giant meteorites.

Eoarchaean TTG gneisses of the Itsaq Gneiss Complex, SW Greenland host a large number of ultramafic pods and enclaves. These range from dunite pods and layers in the volcanic rocks of the Isua Supracrustal Belt, to linear strings of ultramafic enclaves hosted directly in the TTG gneisses. These ultramafic rocks are of great interest due to their preservation of primordial isotopic signatures related to Earth’s accretion, ages that potentially exceed those of their host gneisses, and the suggestion that some enclaves represent ancient fragments of tectonically emplaced mantle.

The Ujaragssuit layered ultramafic intrusion is one of these TTG-hosted ultramafic enclaves. The intrusion is dominated by metamorphosed dunites, but crucially preserves bands of chromitite which indicate primary igneous layering. Previous work has identified that the intrusion has an age > 3.8 Ga, and may be as old as 4.1 Ga, making it the oldest chromitite on Earth and a candidate for the oldest terrestrial rock. Furthermore, the intrusion may have sampled mantle formed before the Earth’s late accretion was complete. Samples were collected during fieldwork in the summer of 2019, combined with small-scale mapping of the Ujaragssuit intrusion and its relationship with the surrounding gneisses. Work has begun on U-Pb zircon and high-precision Re-Pt-Os dating in an attempt to confirm the age of the Ujaragssuit intrusion and understand the preservation of primordial isotopic anomalies at this location.

Dunite layers and lenses in the Isua Supracrustal Belt have previously been interpreted as ancient mantle residues, making these some of the oldest mantle samples on Earth and providing a key piece of evidence for the interpretation of the Isua Belt as an ophiolite. Based on new Re-Os isotopic work and PGE analyses, we concluded that the dunites were in fact ultramafic cumulates derived from crystallisation of magmas similar to the volcanic rocks at Isua. The dunite lenses therefore likely represent magma chambers or conduits that fed volcanism 3.7 billion years ago in the Isua Supracrustal Belt, and do not provide evidence that the belt is an ophiolite. This work was recently published in Earth and Planetary Science Letters.

Archaean to Proterozoic noritic dykes in the Maniitsoq region have been interpreted as either arising from boninite-like melts formed by re-melting of previously depleted mantle, or as the product of extensive crustal contamination of an ultramafic melt such as a komatiite or picrite. These different interpretations have profound implications for the geodynamic setting of the North Atlantic Craton at ~2.5 Ga; a boninite-like origin could imply the presence of a subduction zone, whereas a crustal contamination origin might imply the presence of a mantle plume or incipient rifting of the craton. Work is ongoing on these samples using a range of analytical approaches, including major-, trace-, and platinum group- element abundance analyses; EPMA mineral analyses; Lu-Hf, Sm-Nd, Re-Os, and O isotopic analyses; zircon and baddeleyite U-Pb dating; and detailed thermodynamic and trace element modelling.

A compositionally similar series of ~3 Ga noritic intrusions also occurs in the Maniitsoq region, known as the 'Maniitsoq Norite Belt'. They have previously been interpreted as magma conduits and intrusions generated by mantle melting in response to a giant impact, but both their relationship to their host gneisses and even the presence of a giant impact in the Maniitsoq region are disputed. Our study, along with companion studies as part of the Government of Greenland Maniitsoq 1:100000 map sheet project, found no evidence for a giant impact. We instead interpreted the synchronous formation of TTGs and norites in the Maniitsoq region, immediately followed by high grade metamorphism, to reflect the existence of an ‘ultra-hot orogeny’ in the region at ~3 Ga – a rare type of high temperature metamorphic and deformation event that no longer occurs at the present day.