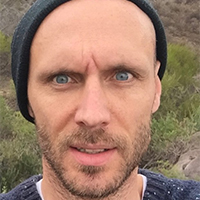 I am an isotope geochemist primarily working on questions regarding the growth of the continental crust through time. My main focus is Early Earth evolution and Precambrian geology.

I did my undergraduate and my post graduate studies at Lund University, before moving to Perth, Western Australia to do a post-doc at the University of Western Australia, where I worked on the earliest evolution of the Pilbara Craton.

My current project focuses on the earliest growth evolution of the Fennoscandian (Baltic) Shield, where I through coupled zircon U–Pb, O- and Lu–Hf isotopes will study the crustal growth history of northern Sweden and Finland.

In an ideal scenario, detrital zircons sampled at the river-mouth of a large river will represent the exposed continental crust exposed within the catchment area drained by that river. Coupled zircon U-Pb, O and Lu-Hf isotope studies of such detrital populations have been shown to be a powerful tool when investigating the growth history of large areas (e.g. Iizuka et al., 2013, Petersson et al., 2018). However, it should be noted that, as shown by e.g. Allègre and Rousseau, (1984), Hawkesworth et al. (2009) and Dhuime et al. (2011), several factors including preservation, age, topography and tectonic setting plays a role in the representativeness of the detrital zircon population sampled at the outlet of a river-system. Some of the biases that effect the zircon populations of detrital samples include the lack to pick up younger magmatic and metamorphic events, which may not be recorded by chemically and physically robust minerals like zircon, a resilience that potentially bias the zircon record towards older protolith information. However, when studying the early growth history, with a focus on the growth of the continental crust, these biases become, although still present, less of a problem. Due to the large areal coverage, detrital zircon populations can potentially reveal magmatic growth events not picked up via sampling of magmatic intrusions or via sparse occurrences of inherited grains in such intrusions, and in turn the O and Hf isotope signatures can further our understanding of the crustal evolution of the investigated terrane.

When calculating initial Hf isotope ratios, applying an accurate crystallisation age of the host rock is crucial, something that becomes increasingly difficult when dealing with detrital grains (Vervoort and Kemp, 2018). Especially Archean grain, where ancient Pb-loss, relatively close in time to the igneous crystallisation event, can generate concordant data without geological significance. However, when looking at published data from northern Fennoscandia, such data is rare, and discordant grains, if present, commonly plot of the concordia curve with undisturbed 207Pb/206Pb (e.g. Andersen et al., 2007; Lundqvist et al., 1998, 2000). However, exceptions do occur (e.g. Högdahl et al., 2012; Petersson et al., 2015a), and is something that needs to be taken into consideration when interpreting the zircon Hf isotope data.

The vast majority of zircon Hf isotope data from Sweden has been concentrated to the central and southern parts Sweden (Andersen et al., 2009; Andersson et al., 2011; Brander et al., 2011; Petersson et al., 2015a, 2015b, 2017; Petersson and Tual, 2020; Vervoort and Patchett, 1996), but little has been done in northern Sweden. One exception is a study of a small area in the Skellefteå district that show primarily juvenile to mildly juvenile Hf isotope signatures at ~ 1.9 Ga (Guitreau et al., 2014). Nd isotopes, however, is more readily available, and suggest the terranes of northern Sweden, south of the Archean-Proterozoic border, to be mainly juvenile (Wilson et al., 1985) while recycled crust become more evident in southern Sweden (Patchett et al., 1987). A mildly depleted mantle underneath the Fennoscandian shield has been suggested by numerous studies (e.g. Valbracht, 1991; Claesson and Lundqvist, 1995; Andersson et al., 2006, 2007; Andersen et al., 2009; Rutanen et al., 2011; Petersson et al., 2017). The cause to this relative enrichment or mild depletion of the mantle has been suggested to be the result of long-term subduction beneath the Fennoscandian shield (Andersson et al., 2007; Andersen et al., 2009; Petersson et al., 2015; Rutanen et al., 2011). If the cause behind the near chondritic isotope signatures in Fennoscandia is a long-term crustal enrichment of a well-mixed upper mantle, it is reasonable to assume that the initial signatures, before the long-term enrichment begun, would reflect an uncontaminated, truly MORB-depleted mantle source. However, this is not seen in the isotopic record, and hence an alternative explanation is required. Also, most of the subducting plate is made of mantle derived material that is returned to the less accessible lower mantle, from which it originated (Creager and Jordan, 1984; Morris and Ryan, 2003), where the isotopic effect on crust generation would be negligible.

I intend to characterise the initial crustal growth history of Sweden through coupled zircon U–Pb, O and Lu–Hf isotope data from detrital zircon grains from six major river systems in central to north-eastern Sweden. This data is put in a context of a mantle source that corresponds to the existing knowledge of the region, rather than applying a generic MORB depleted mantle source.