During an expedition in 1933 led by the famous polar researcher Knud Rasmussen the first surveys of glaciers and geomorphology were carried on Ammassalik Island and at the Mittivakkat Glacier. Because of this mapping, the Mittivakkat Glacier catchment was chosen as one of the Danish research sites during the International Geophysical Year in 1957-1958. At that time the glacier terminus had retreated 0,6 km. since 1933. In 1970 a permanent field station, The Sermilik Research Station, was established, to provide a logistic base for the ongoing glaciological, hydrological and geomorphological investigations of the Mittivakkat Glacier and its catchment. In 1990 an "Arctic Physical Geographical Research Group" was formed at the Department of Geography and a comprehensive "Arctic System Science Research and Monitoring Project" was planned, leading to the establishment of automated climate and river measuring stations in the catchment. After 2000, datasets from The Sermilik Research Station have been used in modelling, distributing and simulating climate, snow cover, snow and glacier melt, run off and sediment transport in the Mittivakkat Glacier catchment. Models have further been used to forecast the effect of global warming using IPCC and HIRHAM predicted scenarios.

The Sermilik Research station can be used year-round. However the climate and the logistic constraints during the winter months makes the summer period June -September the obvious high season for field research. The fjord adjacent to the station is ice covered during December-May. The main building is an insulated wooden house of 60 m2 with three rooms for scientists, a dining room, a living room, a kitchen, a toilet and a storage room. A second, nonisolated building of 50 m2 holds workshop, equipment, generator, a zodiac rubber boat as well as optional accommodation for four persons in a separate room. A small separate building holds fuel storage and additional equipment. An annex facility (a 6 m2 wooden building) is situated on a small nunatak at the equilibrium line of the Mittivakkat Glacier 515 m.a.s.l. The annex supports the monitoring activities on the glacier and can be used for accommodation during field work. The station buildings allow the accommodation of 6-10 researchers. During student summer field courses a tent camp is established at the station. 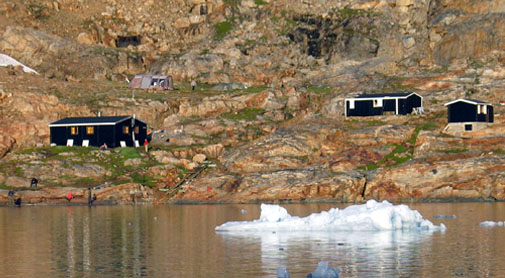