This project has resulted in a book on the challenges and prospects of Danish small towns (‘stationsbyer’), with contributions from researches from KU/IGN, Aarhus School of Architecture and the Danish Technical University.

Migration from rural to urban areas has been an ongoing trend for many years. Today migration from city to city, from smaller to bigger cities and metropolitan areas, is polarizing the development further. Many small towns, also in Denmark, are facing decline.

In this project which resulted in a book, we looked at the current population development, the state of public and private services, the labour market, transport patterns, landscape and historical development, social organisation and spatial planning in Danish small towns.

We focused on 250 towns with 1000-5000 inhabitants which got established between 1840 and 1940 as service towns for the then newly export-oriented agricultural sector, often in connection with new railway stations. These towns were called ‘stationsbyer’ (literally: station towns) and this term is still widely in use today. Many of those towns were at their peak when they got appointed as municipal capitals following the municipal reform in 1970. Since however, development has gone in different directions and the merger of municipalities in 2007 (from almost 300 to 98) has taken the role as municipal capital from almost all small towns.

In the book we discuss the main challenges and potentials of Danish small towns and in particular of six case towns (Holeby, Hurup, Langå, Kolind, Ørbæk and Skævinge). 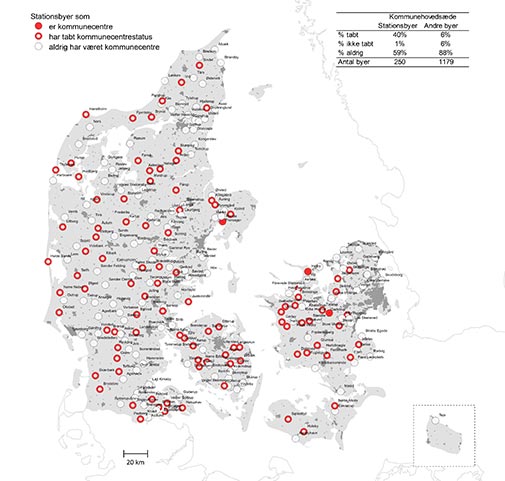 Out of the selected 250 small towns, 100 small towns (red ring) lost their role as municipal capital after the structural reform in 2007. This category of towns was extremely hard hit of the municipal reform compared to larger or smaller towns.

The book is written in Danish and contains the following sections:

The book can be downloaded here

Development of the railway network in Denmark since 1847. The data was digitized for the project and is available on http://wohn.heim.at/jernbane.

The project started in April 2012 and finished in May 2013 and was conducted within the network of  the Centre of Strategic Urban Research. Researchers from the University of Copenhagen (Section for Landscape Architecture & Planning and Section for Geography), Aarhus School of Architecture (Landscape and Urbanism Platform) and Danish Technical University (Transport Department) participated in the project. The project was financed by Realdania. A follow-up project on strategic planning in two of the case cities (Hurup and Ørbæk) was conducted in 2014-2015 with participation of the University of Copenhagen. This project was finance the Danish Ministry of Housing, Urban and Rural Affairs, contract 2012-3398.