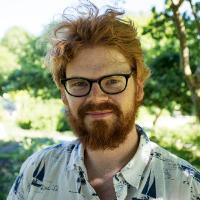 Seismic wave field modelling of shelf mudstone successions in dip and strike transects of the mid-Cretaceous, mid-Norwegian shelf and Barents Sea, and/or Late Jurassic of the North Sea. The work is based on seismic and wireline log data as well as simple lithological models, supplemented with core measurements and sedimentological interpretations.
Depending on the available data, the theoretical seismic response will be examined and modelled with the aim of making estimates of the organic content within shale successions.
The first goal is to make a simple lithostratigraphic model of the area, based on ordinary reflection seismic surveys, tied to well-logs and cores from DONG energy. The model is used as a first order approximation to define the physical properties and structures of the subsurface and as a basis for modelling the seismic wave field of and compare it to a seismic survey. The constructed model is to be used to investigate the wave field in the area, to investigate if the shales content of organic matter is unconventionally map able.